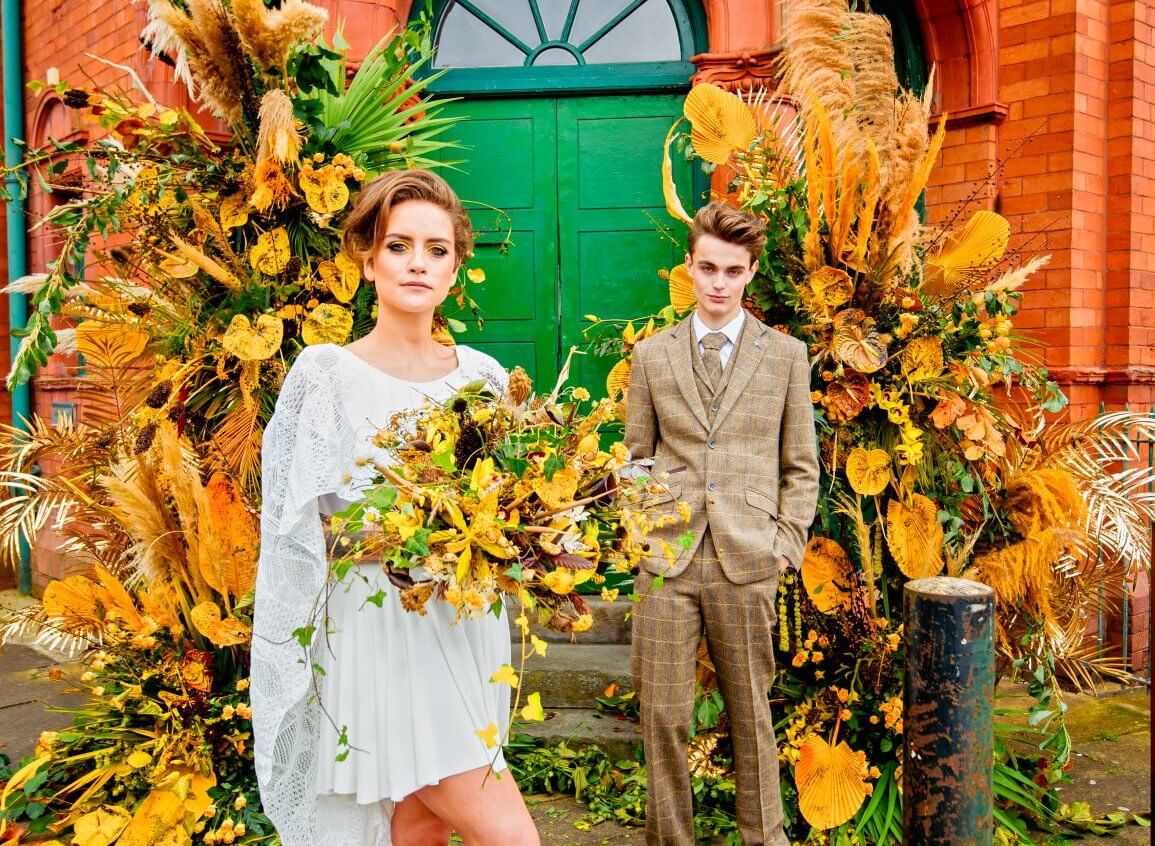 We are delighted to announce that as of January 2021, Salford Community Leisure will be managing weddings at another unique wedding venue in the city.

Salford Lads Club, which started in 1903 for working lads from the docks estate, to keep them off the streets and out of gangs by providing sports, arts and education, shot to international fame when its iconic sign and redbrick frontage was the backdrop for a picture (now in the National Portrait Gallery, London) by photographer Stephen Wright, and used on the inner sleeve of The Smiths’ album The Queen Is Dead in 1986.

At the time of the iconic album photo, The Smiths were at the height of their musical success, owning the alternative rock music scene and since then the club has attracted fans and visitors from all around the world.

The 13,810 sq. foot listed building is a beautiful Edwardian red brick construction on the corner of St Ignatius Walk and Salford’s real Coronation Street, in Ordsall, Salford, just off the M602.The building is listed as the best surviving example of a pre WW1 lads club in England.

Described by visitors as a Tardis, once inside the venue is huge and includes sports courts a concert hall and bandroom, an original billiards room, snooker and games rooms, a boxing gym. The ground floor corridors and entrance have the classic Edwardian red glazed brick seen in many of Manchester’s hospitality venues.

The club’s Smiths room was set up in 2004 by artist Leslie Holmes, in response to the legion of fans from all over the world who made the pilgrimage to stand on the same spot as The Smiths under the famous club sign. The building “Should be a world heritage site” according to US TV presenter Roger Bennett in a recent film made by VisitBritain.

The venue is now fully registered and licensed to hold weddings, civil partnerships, civil services and vow renewals. Each wedding can be tailored to couples’ requirements with organisers working with local suppliers including caterers, bar providers and venue dressers to create the full wedding experience.

Prospective brides and grooms can select one of four function rooms that accommodate 20-150 people including The Band Room (20 guests), The Smiths Room (40 guests max) The Senior Games Room (up to 80 guests) and The Concert Hall, for up to 150 guests.

The venue is a wedding photography dream, with many interesting original interior and exterior features, and wedding party guests can recreate the famous Smiths line-up photo outside the iconic entrance.

Weddings at Salford Lads Club are being managed and run by our weddings team who also manage other unique wedding venues in the city including Ordsall Hall and Salford Museum and Art Gallery.

Councillor David Lancaster, lead member for environment and community safety said: “Salford Lads Club is such an important part of the city’s heritage and indeed cultural landscape and it’s fantastic that it is now licensed for weddings. It means couples can celebrate their big day in this unique venue and more people can experience this iconic building, as well as helping to support its upkeep.”

Our Weddings & Events Manager, Sue Bainbridge, said: “We’re delighted to bring this historic venue into our wedding fold. It’s one of the city’s most iconic buildings and unusual wedding venues, steeped in heritage, local social history and music folklore. With the current Covid-19 restrictions in place, the smaller spaces are ideal for up to 15 people.”

Profits from weddings at Salford Lads Club will be split between the official Salford Lads’ and Girls’ Club charity for the ongoing upkeep of the spectacular building, and the services managed by Salford Community Leisure including leisure centres, community centres, libraries and museums.

Project Manager at Salford Lads Club, Leslie Holmes, said: “The club is a remarkable surviving example of working class culture, it’s what attracted Morrisey here, with its famous footballers, boxers, The Hollies, and of course Coronation Street and A Taste of Honey. The building is almost untouched since it was built in 1903, so what could be better setting for a unique wedding as you will also be supporting the club and helping future generations of young people.”

The first couple to book a Salford Lads Club wedding are Joy Ainsley (45) and Dean Baylin (46) from Harrogate who are huge Morrissey and Smiths fans. Joy said: “We can’t believe that we can now officially get married at Salford Lads Club. We’re lifelong Smiths and Morrissey fans and have seen Morrissey 33 times. My fiancé Dean, popped the question outside the club last year and we have visited it numerous times, had tours, and been to the club attending other events. We’ve taken so many photos inside and outside the club, and we’ve recreated the album photo pose outside with friends, that it feels like a second home.

“The wedding itself will be very much in a Smiths-vintage style and our bridesmaids will be wearing Doc Martens with their hair done in victory rolls and guests will receive Smiths and Salford Lads Club themed wedding favours to keep forever. We even have a Manchester band playing (The Lottery Winners) who have just been signed by Warner Records by the legendary A&R Seymour Stein, who also signed The Smiths and has dubbed them as the best thing he’s heard since The Smiths!.

“The band who are huge Smits fans themselves, will play ‘There Is A Light That Never Will Go Out at the ceremony, which is also featured on their current lockdown covers album Sounds of Isolation.”

The club volunteer team provide tours for visitors every Saturday from 11am until 2pm including a shop stocking a range of Salford Lads Club merchandise.

Wedding packages at Salford Lads Club start from £1250 (room hire only and many packages are available including food and drink). Venue hire is available from January 2021.

For more information about weddings please email salfordladsclubweddings@scll.co.uk and check out social media for updates via Instagram and Facebook.

Did you know that SCL operate cafes in two of the city’s parks, Clifton Country Park and Parr Fold Park…

Sign up to our mailing list and be the first to find out about our latest news, offers and forthcoming events. Stay in the know, on the go.